I made Laundry++, a short game about a shitty experience I had, to show folks why I'm afraid to be in public spaces as a trans woman. It takes about 5 minutes to complete.

If you liked this one, check out the other laundry-inspired games on my page! 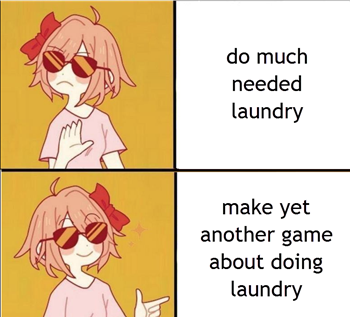 Thank you for sharing this. My own experiences of street harassment for being trans have been different, but the objectification is the same. I'm sorry.

Fetishization of a group of people is a way of prejudice that not enough people know about. You can be attracted to different genders, or different types of people, but you cannot think of a group/gender only in a sexual way, because you aren't thinking of them as people at that point, you are thinking of them as your toys to play with. Honestly I can't believe how there are so many people that do this. There aren't that many compared to the amount of normal functioning humans, but you encounter so many different people in a week alone that its probable you will see some. I just can't comprehend how they do these behaviors, because even most homophobic or racist people would know not to do that to anyone. At least I can understand homophobia or racism, because it is passed down from parents most of the time (not saying that it isn't a horrible think, I just understand why it happens). But I don't know how people even do this, as it isn't something that is widely accepted by any group of people. I'm sorry you had to come into contact with this parasite of a human, and hope something similar doesn't happen again.

Thank you. There's definitely a lack of empathy happening. Stuff like this reinforces my self-consciousness.

ewww, god thats so gross, cis men in general scare me, ive had similar experiences, though not yet from a stranger, but i get it, its not fun. Im transmasc not transfem but people can get so creepy once they clock you. Thank you for making this story and sharing your experience, im so sorry he did that to you. The fetishization of trans people has got to stop, we are just trying to live our lives out here smh.

thank you for the nice comment! im sorry youve had similar experiences ):  im glad i was able to turn this into something constructive.

honestly "wtf" is the only way i can fully respond to something that fuckin gross. just..... do people not know common decency at the very least????? like genuinely wtf.

you seem pretty cool honestly, as a side note.

i knowwww... tell me about it. that fucked me up lol

It feels weird to say I "enjoyed" this, but I did. Super good use of bitsy, both in the general sense of creating pixel game environments and more specifically in using the spaces to convey your experience. Is it awful to say that the little dancing dicks made me laugh? Because they did. Thank you for sharing this.

Thank you!! I have a perverse sense of humor, so I understand lol

Creative great work. Thanks for sharing your experience. You´re fantastic!

Reply
Juno AM2 years ago

Reply
Juno AM2 years ago


the worst i ever got was some dude telling me "im mad homophobic, but i respect you for doing you" and then telling me to punch ppl in the face if they "mess with you for being gay", so.

i rly liked this work! i think it did a lot of cool stuff with the tools, and rly felt like something that it *took* bitsy to properly tell, instead of like something hampered by the parameters of bitsy, if that makes sense

it wouldnt have been made without bitsy since i really just wanted a simple interactive narrative. so bitsy was perfect!

Hey Juno. When I first played this I wasn't logged in but I just wanna say I love you. This game speaks to me a lot.

Oh my, that guy was a creep; how can he act like he owns the world and stuff?

I doubt that he will be the last crazy person you encounter in life, so stay strong and persevere :)

thank you for the encouragement!!

God, that's really awful. Thank you for sharing this Juno. Having this experience wrapped up in a game is a good tool for showcasing the shit trans folx have to deal with.

Fan of the color scheme and sprite work! It all reads really well and cleanly, especially the blinking screen transition areas.

thank you ayla! i hope so.

im glad it reads well. this was my first time doing anything pixel-y, so im still trying to work out how to represent things using 8x8 tiles.

also, thank you for the support! i really appreciate it (:

(he thought my name was june)

Thank you for sharing. I'm sorry you went through that and thank you for making such a lovely experience <3

thank you for playing and the compliment! i hope folks get something out of it

You're Welcome, was this made in Bitsy?  :D

yup. this was the first time ive really used it. i love it!

Your first time, amazing. better than anything i scraped! this (might) be one of the best Bitsy game yet. :)

BTW I Made A Fan Game: https://blubber34.itch.io/short-laundry-game-for-juno-am Hope You En joy!

Good little experience. interesting and worth a play 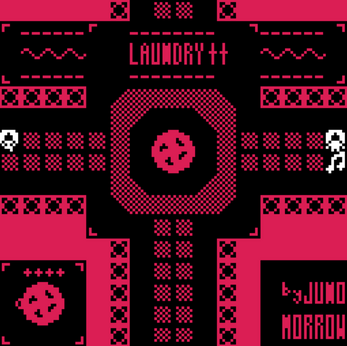 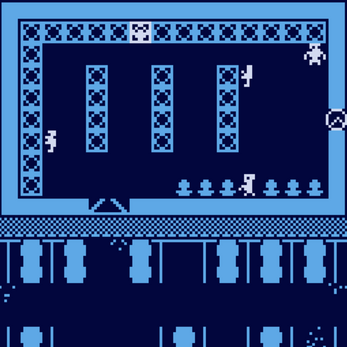